I had the pleasure of reconnecting with a very dear friend of mine recently in anticipation of our undergraduate college reunion in just a few weeks. (Simply can’t tell you which one…just too shocking even for me to acknowledge!!)

Anyway, my friend Tom and I both grew up on Long Island and, since at that time their weren’t too many folks going to our college from that far away, we became great friends who ultimately would travel home together for weekends.

Tom owned a great little Fiat…you know the kind that made you feel every bump in the road and felt like you were driving inches from the ground…which, of course, you were! So every so many weeks, we’d get together and calculate, based upon exams and activities, which weekends would work out well to travel back home together.

Well, my dear friend Tom, was a practical joker and little Miss Gullible would buy into it every time. One weekend as we’re heading home and already on the road, he informs me that he left his wallet at the dorm and since both of us had so little money as college kids, we were in a bad way trying to figure out what to do about the tolls through the Delaware Water Gap in Pennsylvania and the George Washington Bridge to get from New Jersey to New York.

So here we were…no money and, at least for me, a lot of nerves. When we drove through the Delaware Water Gap’s 25 cent toll I thought, “what’s the most they can do to two college kids for 25 cents?”

But when we came close to GWB, Tom tells me to duck down because he decided to run the toll and since I knew there were those gates that came down in front of each car, all I could imagine was all this wood flying everywhere and some massive group of highway patrolmen chasing us across this huge bridge which crosses over the Hudson River. You know, something out of a movie.

So here we go coming close to the bridge and I remember to this day how nervous I was and thinking if I got a black mark like this on my life, I’d never get a job! Crazy kids.

As instructed, I ducked down low in the seat asking along the way how far we were to the bridge. Tom would update me. Finally, as we get closer he tells me he’s going to run through the gate. I’m freaking out, as visions of wood and windshield glass flying everywhere is racing through my mind.

Seconds later I hear a woman toll taker say…”Thank you,” and this ‘ding’ that proclaims the money has been taken, and I realize my dear friend Tom has tricked me again, only this time over the length of a two hour drive. I thought I would die. All he could do was laugh as I screamed at him. I thought I would kill him. And if I recall I did hit him a few times.

So why am I telling you about this funny story…because my friend Tom, I have just learned, is a proud Veteran of the United States Military. While at college, he was a ROTC (Reserve Officers Training Corp)…definition: college students who receive training as military officers for future service in the armed forces.

While a young gal in the sixties (oh, well so much for hiding my age!), I saw my classmates’ older brothers coming home in bodybags from Vietnam. I saw others coming home injured and some had great difficulties coping with life after war. And I was so sensitive to their pain because our country was in such turmoil during that war and I never felt it was right that our citizens punished those who served.

And in my first conversation with Tom in these several decades, I learned he served in Bosnia and Iraq. And I will have the privilege of driving up to our college reunion with him soon to catch up and hopefully he will share much about his life that I have lost out on.

Today in the USA it’s Memorial Day, when we honor and remember those who lost their lives in service to our country and gave the ultimate sacrifice. Let us remember them and their families who miss them.

Let us also salute all the men and woman who now protect and defend us because we can’t, and to their families who have sacrificed much while they are serving and when they come home. I, for one, am an American who is eternally grateful.

All these very special people give us these liberties that other men from other lands have died to partake in. Let us acknowledge their sacrifice and emotional and physical pain. Let us address all their needs when they arrive back home. Let us honor them today and always, as I do, by walking up to them at the airports and elsewhere and simply saying “Thank you for serving for me.”

Yes, it’s been a long while since September 11th, 2001, but we all know how life changed from that point on. And while we have been blessed not to have experienced another major event on our own soil, our military has kept that at bay.

So I am looking forward to hearing all of Tom’s stories when I see him in a few weeks. And I bless him and the members of all our military branches for their devotion to our country, the United States of America, and its fine people. 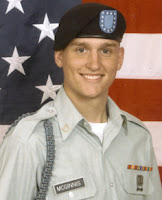 It’s a very hot and sunny day today and while I expected to be at the pool by this time, I found myself working on the computer much longer than anticipated.

In the background I had C-Span on listening to the ungratefulness of the Iraqi Ministers testify in front of the Congressional Foreign Affairs, Int’l Organizations, Human Rights, and Oversight Committee.

When it was over, it replayed the Monday service at the White House where President Bush presented the Medal of Honor to the parents of Private First Class Ross McGinnis of Knox, Pennsylvania, whose brave service in Iraq saved the lives of four fellow servicemen when he put his body in the way of a grenade on December 2, 2006.

I found myself moving away from the computer and standing at attention in front of the television. I found myself moved to tears. As President Bush recounted how this young man wanted nothing more in life than to be a soldier, from the time he drew his picture at age 6, to the comedian he became, even being able to make his drill sergeant laugh, to always being there for his friends and family.

Although I may never meet any of the McGinnis family or other servicemen and women who were killed, I feel blessed to know there are people who call themselves United States military who protect me all over this world.

It’s easy to measure deaths and destruction, but our inability to measure what has not happened is what we should also concentrate on. We have not had a major attack on our soil since September 11th, 2001. Our President and his administration needs to get credit for that.

If we leave Iraq tomorrow, as many citizens and elected officials prefer, would we still be able to gain the intelligence needed to stop attacks? Unsure.

Sometimes we feel we need to just worry about our own people…bring all the troops home from everywhere on this planet, isolate ourselves, close our borders, move the United Nations to some island where they can foot the bill to house them, exclude everyone who doesn’t belong here and let them all handle their own lives. Let all the folks who hate our country leave and leave now. Let all these ungrateful ministers and heads of other states fend for themselves. After all, they hate us but, of course, they’ll take our money and curse us as they ask for more.

I don’t know the perfect answer and maybe there isn’t one. But today, I want us to remember a valiant man who gave his life for the lives of others – Private First Class Ross McGinnis.

The scriptures tell us, “no greater love than this, than a man who lays down his life for another.” The ultimate sacrifice.

And I don’t know too many people who can ever say they’d do that.