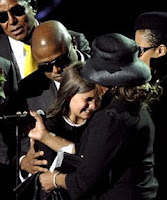 Regardless of whether you enjoyed Michael Jackson’s music, admired his career and his life, or not, he must be given credit for raising such wonderful children.

On Thursday, at his memorial service, the world saw very clearly what a grieving child looks like. Paris Jackson, in all her pain, mustered the courage to speak for herself and her brothers about their Dad and the man he was to her and them.

For a young child to decide it was so important to let the world know what her father meant to her, speaks volumes of the way she was raised and the love she felt for her Dad.

I was amazed at the continued reactions by the media covering the event. I guess for me, who has seen the enormous effect the death of a loved one can have on a child, it seemed slightly insincere. Inside I was thinking, “have they not ever witnessed someone in deep pain before? Had they never, in all their years of reporting, not seen real, raw emotions when a person knows this particular day will change their life forever? Had they never know the death of someone close to them in their life yet?”

Grieving children are everywhere. Sometimes we get to see it up close and Paris gave the world a very clear picture of what that level of pain is like. For a short, very personal, moment, she allowed the world to see just what the loss of a father can do.

While she may not know it, her courage and her comments have helped millions better understand the devastating emotions that will undoubtedly continue to rise up for her and her family in the weeks, months and even years to come.

Grief is never easy…it is not pretty…at times it’s even messy, because all of us grieve differently and at different times. And the unnerving thing about it is that until we’re in the thick of it ourselves we rarely will know how and when we will react to it.

So I applaud Paris Jackson’s courage. For with her very brief comments she helped the world better understand that a child’s grief is real and difficult and yet, when expressed, can have a powerful impact on others.